Announcement: The Die is Cast is coming 2021 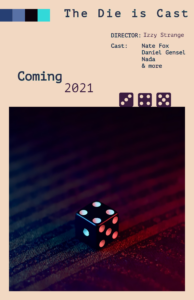 The Die is Cast (Album)

The Die Is Cast is an audio movie that first came into fruition in 2018. Izzy first started building on the idea by writing an outline of the story for structural purposes to make the album easier to create. After a week of creating the outline, he soon realized he could easily turn this into a book. So he kept writing and revising until the book was finally ready for a professional editor. After the story was completed he started making demos for the album. Scouring the internet for instrumentals, he decided to ask frequent collaborator Nada to come aboard to helm the reigns of production. Izzy and Nada spent the first half of 2018 in the studio trying to find the right sound and lyrics to fit this massive idea, eventually becoming exhausted of the idea and story line.

They decided to take a break and Izzy created Izzy Duz It in the summer of 2018 to create something outside of The Die is Cast story line. Izzy Duz it was released on Oct. 31st 2018. After a visit from another frequent collaborator and mentor, Nate Fox, Izzy enlisted Nate to help bring the album full circle. Izzy flew out to LA on Thanksgiving week 2018. There they laid down the major foundation of the project utilizing the handful of tracks created with Nada, as well as creating brand new instrumentals.

Nate flew to Pittsburgh Christmas 2018 and the majority of the vocals were laid down at Tonic Studios in Pittsburgh, PA. Nate took the raw vocals and continued building the instrumentals around them, while Izzy acquired the features. By February 2019, it seemed the album was on it’s way to becoming finished. But life had different plans. The project became stalled due to personal issues in Izzy’s life. He lost simply lost interested in the idea. The project sat on the shelf until fall 2020.

Now the project is almost complete and is set for a 2021 release date.

Stay tuned for more news and information the album.